I hope you're all having a great summer...it has been an interesting collection of cool, hot, raining, and as of late...tornado warnings.  Living in the Great White North, there are parts of our country that are still uninitiated in some of the extreme summer weather that can hit our continent.

Anyway...onto the topic at hand...the club had our turn 3 of our Lorraine Campaign (my buddy Duncan already posted on his game day experience, here)...sadly I missed out on turn 2 as I was out spring camping that weekend...sigh, but the kids loved it.  For those that recall, for Turn 1 I went up against my buddy Bernhard and his Tank Destroyer company led by the very aggressive Patton...

This turn, I went with a Reluctant Trained FFH Armoured company vice the Fearless Trained SS PanzerPioneer company...the main motivation behind my choice was heavy metal...with the FFH Armour I was able to field an HQ - 2 x PzIV, two combat platoons of 4 x PzIV each, combat platoon of 3 x Panther G, and one AAA support platoon of 2 x 37mm Mobelwagons, oh, and one platoon of 2 x Stug assault guns...as well, I received 2 x Firestorm platoons of infantry and had to roll for their skill/motive...I ended up with a Confident Veteran Grenadier platoon and a Fearless Trained SS PanzerGren platoon.  Although no veterans...I still thought it had a lot of oomph.

IIRC, my opponent fielded a British Armoured Troop of 2-3 platoons of Shermans, some infantry, a filled out HQ, and 2 batteries of Royal Artillery (1 x 25 pound; 1 x 5.5 inch)...these were varied troops as well but for the most part Confident Veteran/Trained.

I can't recall the name of the mission, but for the attacker, my deployment was from a single quadrant with reserves starting at turn 3 for deployment in the opposite quadrant (this was my flank attack).  The defender had two opposite quadrants to deploy in with forces held in reserves as well...not delayed though.

My plan was simple: leave the grunts and assault guns in reserve for my flank attack and put my heavy metal on the table.  Even though they were all Reluctant/Trained, I thought their firepower and numbers would set me up well.  Objective placement has defender and attacker place one objective each in the open quadrant (opposite corner from me) which I thought would be fairly simple to get to given that the defender only deployed his artillery and one infantry platoon.

In the end I lost a couple of platoons...I killed a platoon and part of a battery...and my Reluctant troops proved Reluctant and unimpressed with my poor rolling...as for my plan, I thought the artillery would be a pushover to get past...they proved very tough, especially in the assault, very unexpected.  In hindsight, I should have kept one of the infantry platoons with the main force and pushed them forward for the assaults and then let my armour double time to the objective.

Anyhow, as always, it was great to get some gaming...and I had the chance to field all of my recently painted Panzer IV Company.


Initial deployment...Germans in one quadrant, Brits in two opposite quads... 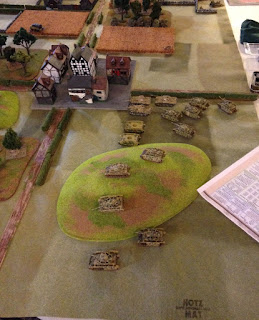 Brits with their artillery batteries in top left and lower right...German heavy metal in top right...objectives in lower left...just a small ville and some fields in the way...Oh, and those piddly looking guns 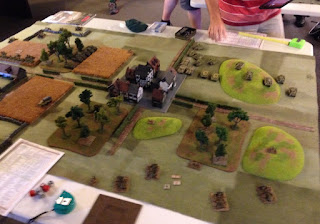 Impressively the Brit artillery proved rather impervious to my tank assaults...a testament to my crappy dice rolls and my opponents excellent saves and defensive fire...﻿ 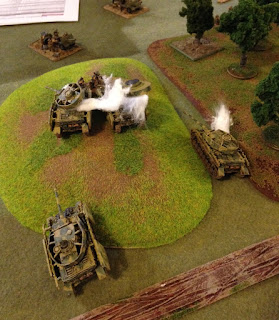 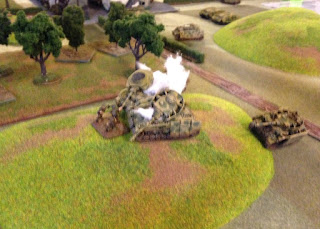 Company commander and second combat platoon push through the ville towards the objective... 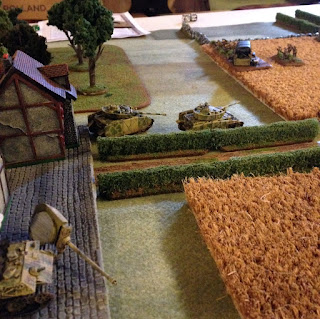 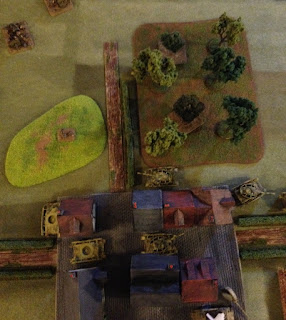 In time for the British reserves to come in...2 platoons of tanks, deployed with the pain in the arse artillery...combined fire takes out my second platoon...sigh... 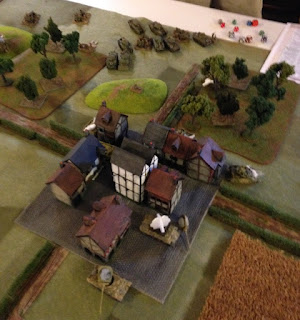 Back to the 'Nam...Resistance Teams

While I haven't been very active on 'the internets' over the past month or so, I have been working through the mountain of lead that is my workbench, in particular getting through my Main Force VC and enemy force for my Air Cav troops.

My first objective was to finish up some resistance teams...these look like an interesting force option for Flames of War and make the Free World forces jump through some hoops to clear them from the field.  IIRC they also provide some eyes on the ground for the Main Force VC commander.  For Force on Force and Ambush Alley, these stands will work as clusters of civilians for various scenarios.

I modeled mine after a combination of settings (paddies and village road)...there are some figs harvesting rice and there are many figures just working about looking 'inconspicuous'...I used some google-fu to get some rice paddy pictures and started from there.  The main challenge was building the paddy dikes and choosing the right type/combo of flock to simulate rice fields.

This was also the first time I'd used the Army Painter jungle clumps of grass...I like how they turned out and I do like how they changed up each of the bases.

As well, at the bottom I've included a quick preview of 13 other stands that are now just waiting for basing...

Enjoy and as always, advice and constructive criticism are greatly appreciated. 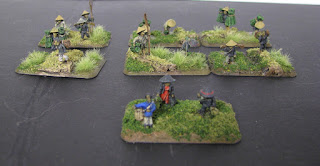 7 resistance teams...I have about 5 more that I will eventually finish. 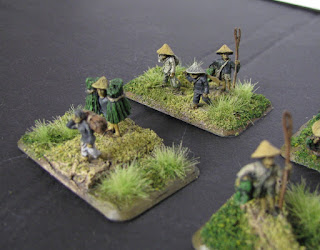 Just some farmers off to the market or back from the fields with bundles of rice and firewood... 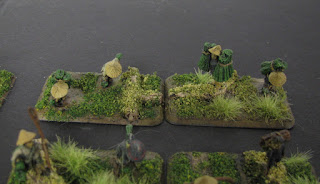 Nothing to see here GI...nothing at all... 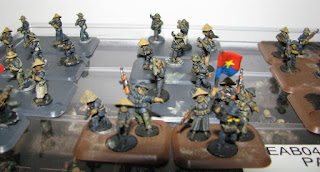 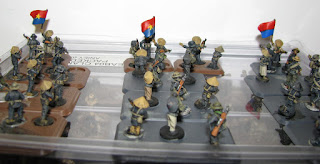 The past month has been fairly busy and successfully kept me from getting any online work done...however, do not despair...I have been busy busy with the workbench.

The only difference with this guard is that they have normal weapons...mace, axe, etc...they are markedly smaller than the gargantuan tower of swords from my first batch.  This crew is also the first time I've tried my hand at shields, so I thought I'd try to freestyle some random designs and colours...apparently my Hearthguard has some representation from Jamaica...I guess if they could have a bobsled team then they could have a crusader?!? Yeah, I'm not sure...

Enjoy the pics...advice and comments are always welcome. 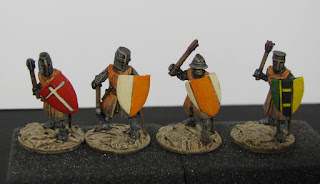 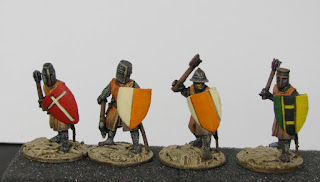 Group shot...warrior for God, a couple of Orangemen, and a design that in hindsight screams Jamaica-man...
Random pics... 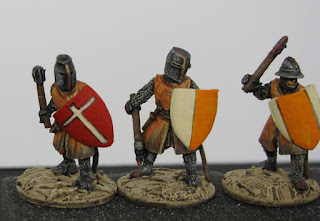 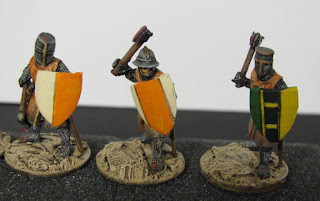