I just wanted to post a quick shout-out to some customer service that I recently received that really surpassed my expectation.  In November I posted a review for Battlefronts Leopard 1 box...here...I was pretty happy with the idea of getting my Canuck C1's on the road.

I was kind of bummed when the box had some issues...the treads were warped and one of the hulls had bubbles in the resin...so, I emailed the folks at Battlefront and gave them a run down of the issues.  I was really hoping for a replacement tank or 2...but instead, this showed up in the mail: 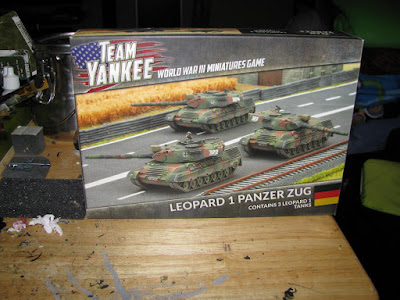 Wow! And when I opened up the box and checked...the tracks were straight as hell...outstanding! 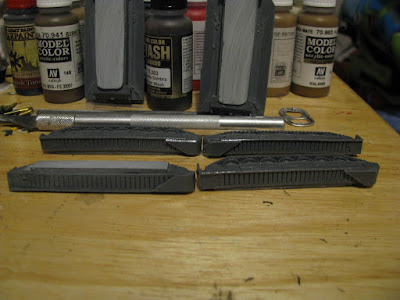 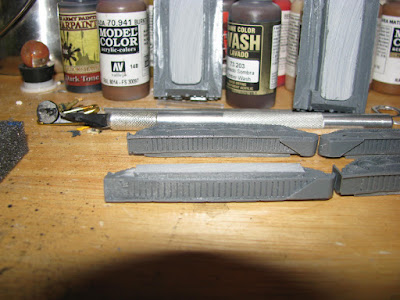 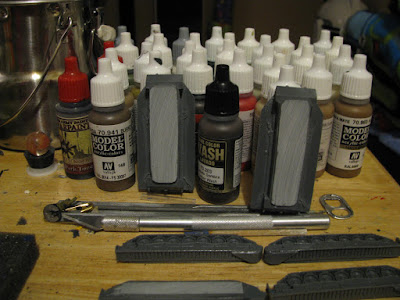 So, to say the least I was very surprised, pleasantly, with the steps that the folks at Battlefront took to address the issues I had with the models.  I admit, I was hoping for a tank or two, but certainly was not expecting a fresh box.

Thank you Battlefront...as you can see by my current figures on the painting pallet, here's to more Team Yankee in the New Year. 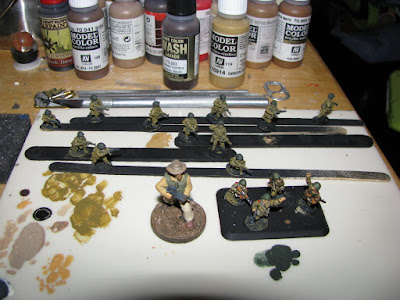 If you've been following my progress, you may have already seen a couple of posts already dedicated to some figs from The Assault Group, tag-various-modern-figs as well as aaaaaaaaaaaaand tag again.  I've enjoyed getting to these guys and have really used them as a testing ground for different camo patterns and paint schemes.

This last installment was no different:


For this fig, I mainly used the paint scheme I saw online of a figure depicting a Tier 1 operator from the early-ish days from Iraq or Afghanistan.  The pants were Iraqi sand, with patches of Russian uniform outlined with Tan earth. 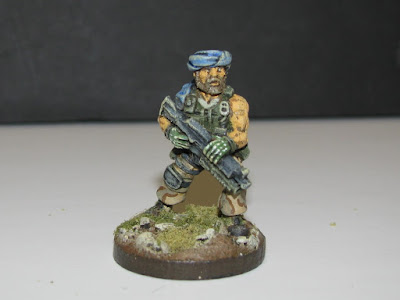 For the gloves, I decided to go with a brighter colour...ala something you would buy at an expedition store...with a skeleton pattern...I thought it would look cool.  I was also testing the relocation of my photo station with flash and no flash shots. 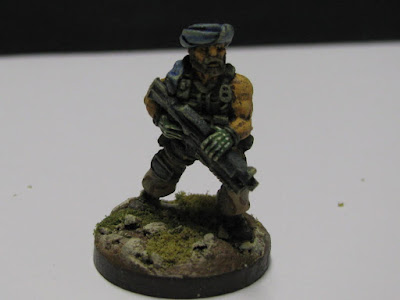 Overhead shot to try to get a good view of the base work... 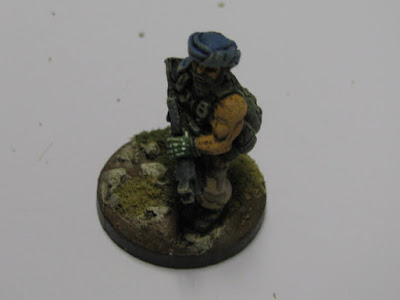 I have a few figures on the bench that look like they may require a tartan type of pattern...so working off the success of my Herb Tarlek, I thought I would try a simple plaid pattern. 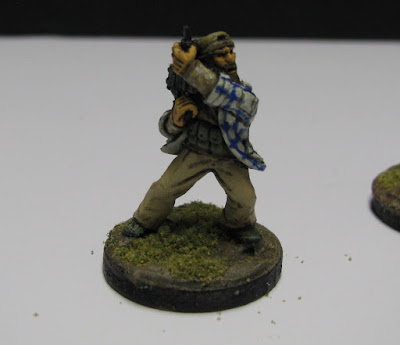 And finally, I have some Vietnam figs that I want to get to in the near future...and I want them as LRRP's so I thought it was time to try out Tiger Striping...I like how it turned out, not sure if it's the 100% capture that I'm looking for or not, but I'm still happy with the result. 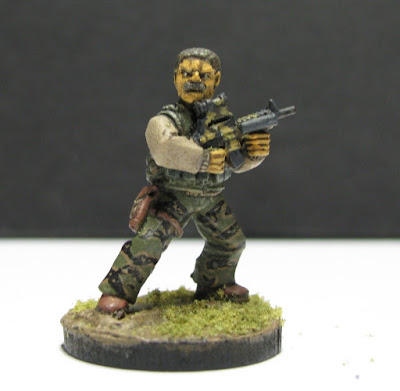 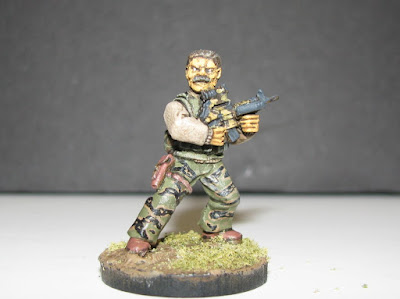 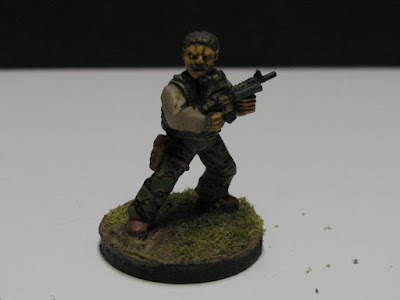 Well, it has been a silent December to say the least...haha, 2 puns in 2 lines, post title and first sentence...boom! While I haven't been posting as much lately, my painting progress has continued nonetheless.

I thought I'd share with you a batch of Frostgrave and Northern City themed Reaper Bones figures that I recently finished...mixed in is a couple of other figs that I got from my buddy Mike...Mike, if you can...please remind me where you got these guys from.

Not messing around...here we go...the pics: 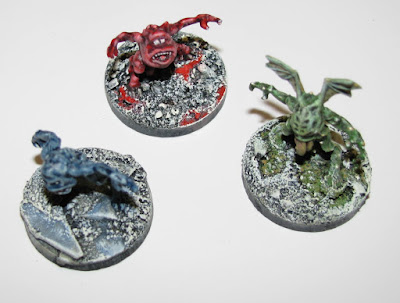 I picked these little guys up a while back...took my time letting them tell me how they wanted to look in this world...in the end, I used some of my WoW DeathKnight inspiration and chose the 3 DK presences: Blood, Frost, and Unholy...and have for you the 3 plagues of the Northern City... 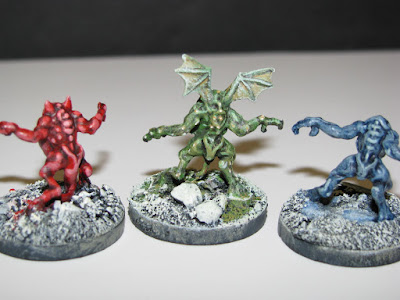 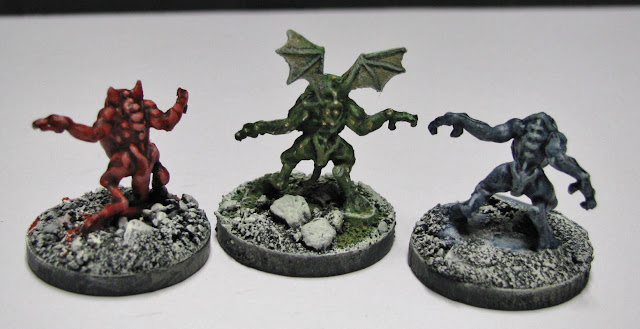 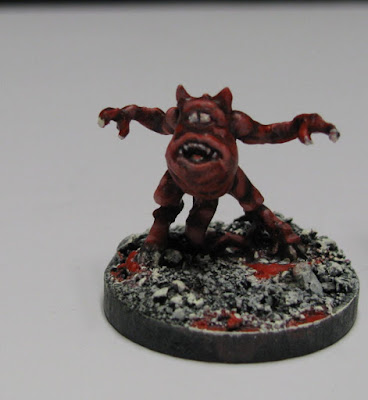 cute-ish little guy with one big Mike Wazcsoski eyeball...wherever he walks pools of blood rise to the surface... 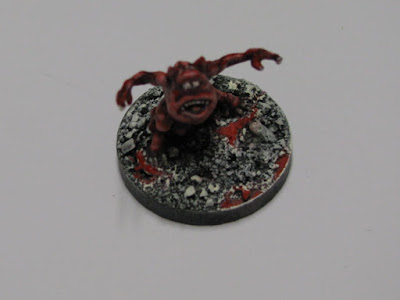 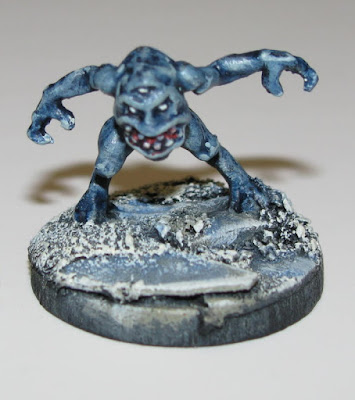 This little guy looks like he stepped out of the local gym, ripped and ready to pose-down...wherever he goes, the grounds of the Northern City become extra frozen
UNHOLY PLAGUE 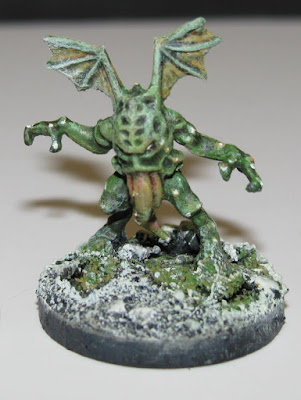 This pint sized bringer of plague, pestilence, and rot is a blistery, greenish yellowish oozing, disgruntled imp of hell...wherever he walks, the ground goes green and yellow with rot, sick, and illness
Their best views... 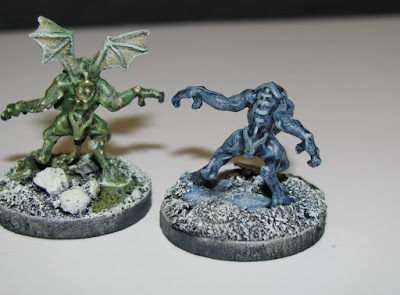 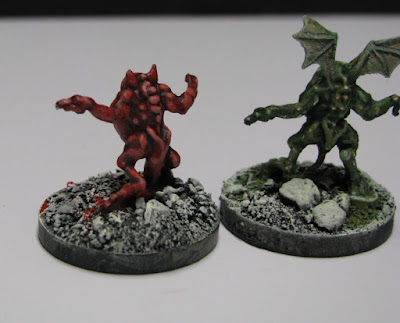 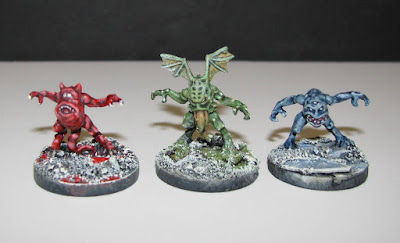 Skeletal army of the dead...
For s's and g's...I decided to pick up a 3 pack of skeleton soldiers one day...I've had them on the bench for about a year...these guys, like the plagues came up very quickly...I think it only took me 2 nights to finish these guys 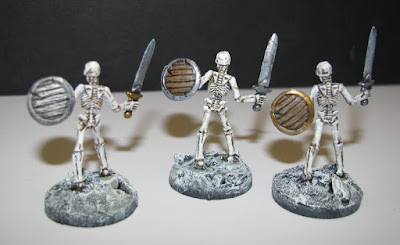 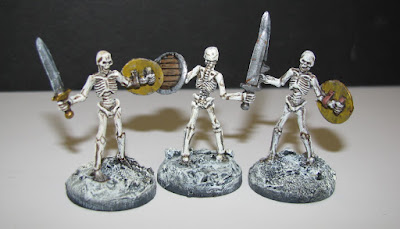 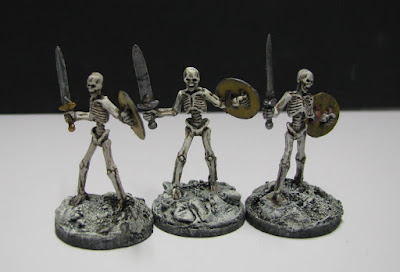 Random Skeleton dudes...from Mike...thanks Mike.
A skeleton captain...or warrior, and an archer...pumped and painted to serve any evil minded Necromancer that needs them...I can't remember who the manufacturer of these two are...they were fun and quick to paint up as well. 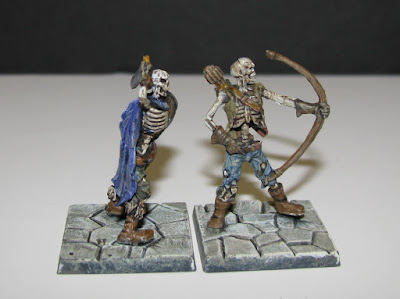 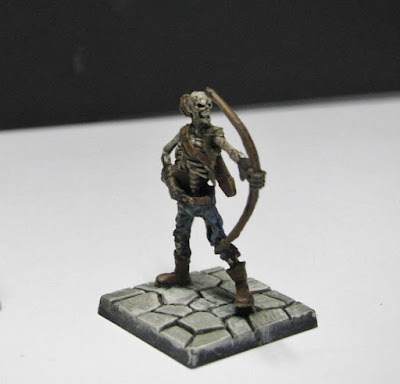 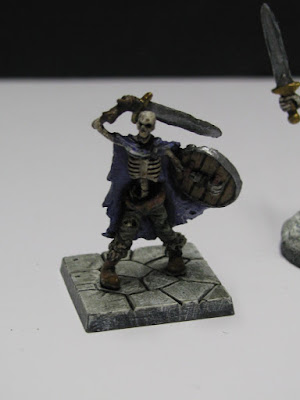