Another week gone by, another progress shot...this time I thought I would post some pictures of some elements that I fielded for our clubs current campaign: Operation Battleaxe - turn 1 BUT was able to get completed.

If you've seen the battle report from that turn, you might remember that this is the first time I've fielded a true infantry force...no safety nets, no vehicles.  Although they weren't DAK troops, I nonetheless fielded some of my Fallschirmjager's to give them a chance at hitting the table top.

I enjoy the look of these troops...there's a lot of detail to the fig's with personnel kit and depending on the field of battle you're trying to capture, there's certainly a lot of variance in the painting scheme for their uniforms.  I had originally started my FJ force as a Monte Cassino company, but given the breadth of theatres of action...as well as needing to field one force for multiple theatres...AND needing a handy way of distinguishing platoons I decided to paint the platoons in various themes.

The first platoon I finished was German Fallschirmjager - Monte Cassino along with some company command elements...but since I have completed a Pioneer Platoon and a recoilless rifle platoon that I painted up with Crete in mind...

For our campaign, although using FJ troops, I was using to the company org chart for DAK grunts...so I needed an early war anti-tank rifle team...so...I thought Crete would be a great setting for this team 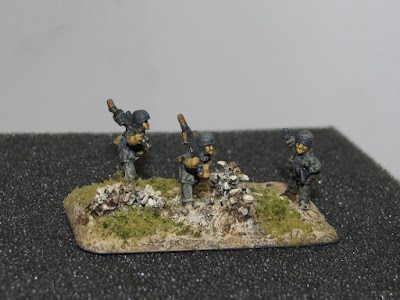 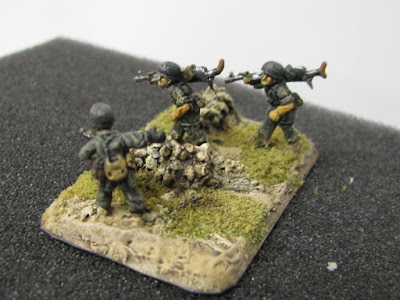 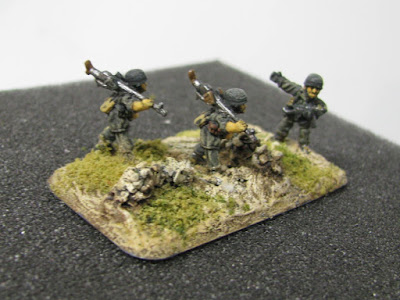 lately when I'm gaming I seem to have some horrible tendency to clutz it up and drop a mini or two...during Cangames, one of Mike's A-10 fell prey to my clutzery...the warthog has since been repaired...however, on the campaign day...I had one of my boxes of gaming goodies fall and actually crush this team...there was much sobbing...In all truthfulness, my box of goodies was in fact a toolbox full of gaming aids, dice, etc...
However, when the dust was settled the two AT riflemen were bent 90 degrees to the base and the NCO, using his experience I guess, was totally fine. 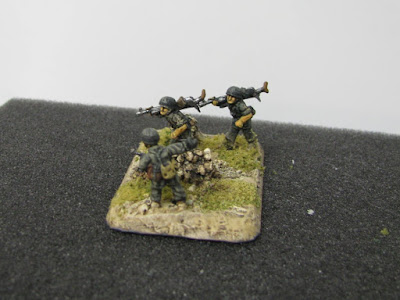 I straightened the two gunners out and had one break off into my hand and the other was balancing precariously on very weak sea legs...so I got home...cursed many things...got the glue out and set about repairing the legs and repainting where needed.  I'm glad these vet's have bounced back and we should see them in action soon...


Thankfully, my DAK 88 platoon did not suffer any catastrophic events...during the game they did fairly well raising hell with Crusaders and grunts alike.  I enjoyed painting these guns up...the bases are from an older box than what is currently available...they're nice, but a little bit of a pain to complete with the pre-formed holes for the troops.  I must admit they did take some finesse and multiple repaints of the base to get figures and bases to blend with each other. 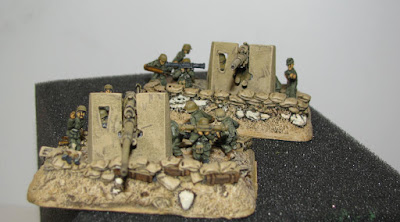 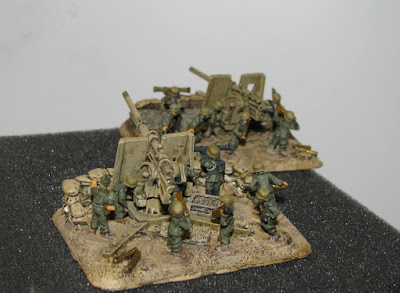 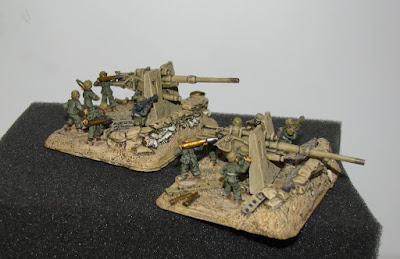 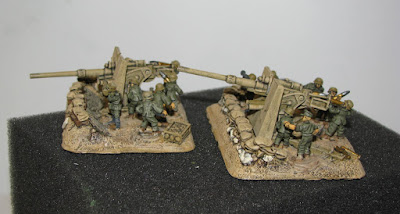 Dropping things on the ground is not good thou, I don't recommend that. I once had a full army in a cardboard box top blow over in the wind onto a concrete parking lot. I learned allot that day. Another time I squeezed a paint to exploding and had red on the ceiling, things just happen...

Those 88s look fantastic- enough to put the fear of God into any Allied tanker!

Thanks Mike...at least I fixed your plane, lol.

Thank you Paul...they certainly did that...I hope to replicate that realworld feeling every time I field them.
Cheers.