I hope everyone is healthy and safe...if there can be any silver lining in our current situation, it has to be all the great posts I've been reading from folks getting extra time with the hobby and for those folks who are either returning or stepping into this hobby for the first time.

Whether it is in the painting or gaming aspects...welcome to and good luck in the hobby. The camaraderie aspect is in your future.

For anyone that has been keeping up with my sporadic posting schedule you will probably recall my lament from my previous post.  Like anyone who has stepped into any type of Star Wars themed painting, when it comes to painting stormtroopers, it can get rather tedious at some point.

Having painted 4 sections of troopers and having other expansions in my future, I was approaching this with some hesitation.  So, with a box of Scout Troopers and a box of Death Troopers this offered a chance for a different colour (i.e. the Death Troopers) and an opportunity to move away from the standard scheme (i.e. the Scouts).

The Death Troopers were fairly 'simple'...I had plenty of Rogue One screen shots to look at, and I always have my main painting guru, Sorastro, to refer to.  Painting a black based scheme was quite challenging but I really like how they turned out...using Vallejo colours, I based with 995 and then first coat was mix of black and gunmetal blue.  From there it was varying shades on that adding in some white.  The wash was a mix of citadel nuln oil and army painter blue (comes out quite nice and dark - somewhat similar to nightshade).  In my research, I had also seen folks paint up a lot of residual lighting effect from the various sensors and lights on the troopers...taking a quick watch of Rogue One and looking at the behind the scenes book, there really isn't much residual glow, however I do like the effect (thanks Sorastro) so I took a middle ground stance of some but not too much.

For the Scouts, I had to paint anything other than plain white! For this I googled scout troopers and found an interesting collection of painting shots, concept art, and images.  Because I was trying to keep with the 'tatooine' theme that I started with, I based my troops in vj 995 and then hit them with deck tan and then mixed in some ivory.  As well, I hit random spots on each figure with US Tan Earth painting 'blocks' or sections of tan to match in with my bases.  After that, I then hit them with mixed wash of citadel nuln oil and army painter strong and dark tones.  Once dry, I went back and hit some of the creases with more dark tone and some random highlights of glossy white and tan earth.

In the end, they came out very scout and fitted with what Reece troops really do...adapt their kit to mission at hand...and I'm really happy with the results.

Anyhow, I hope you enjoy the pics. 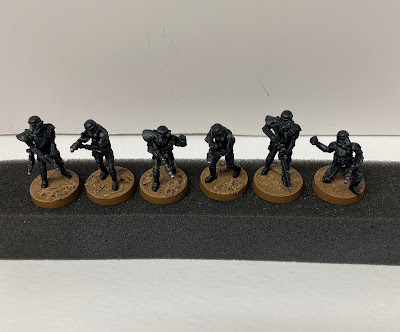 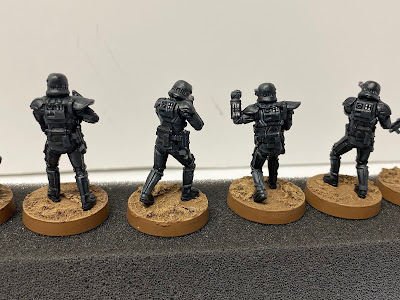 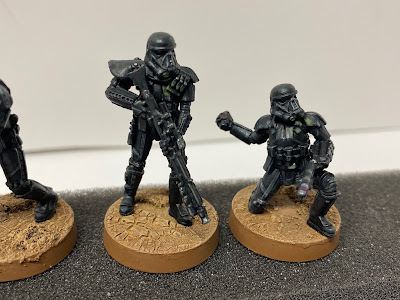 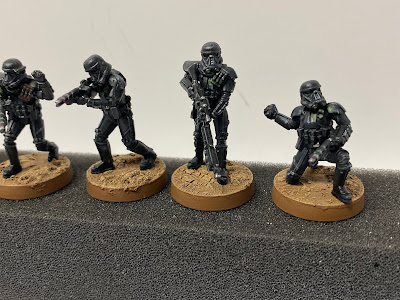 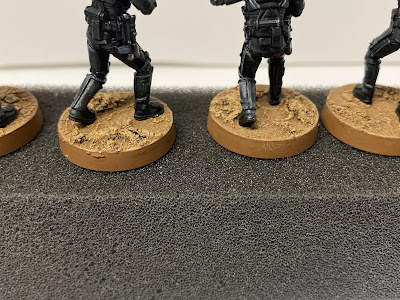 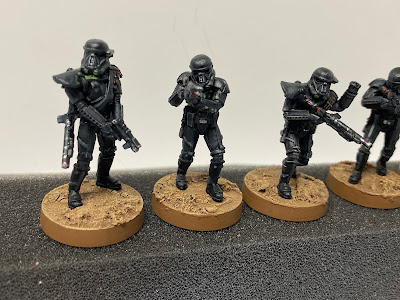 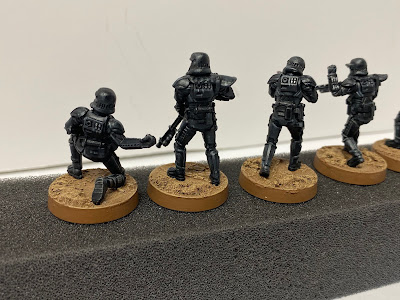 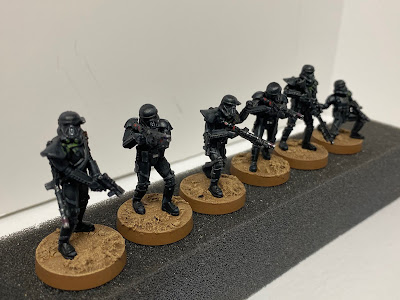 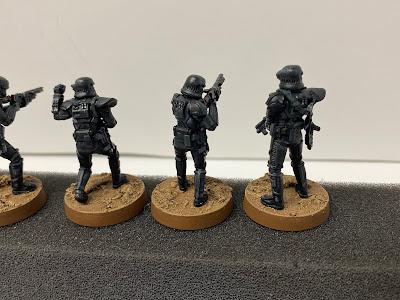 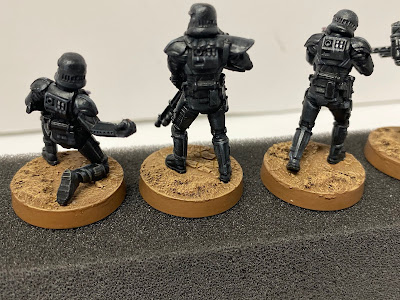 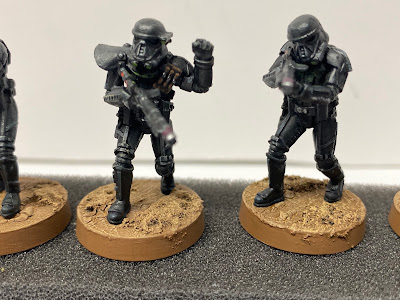 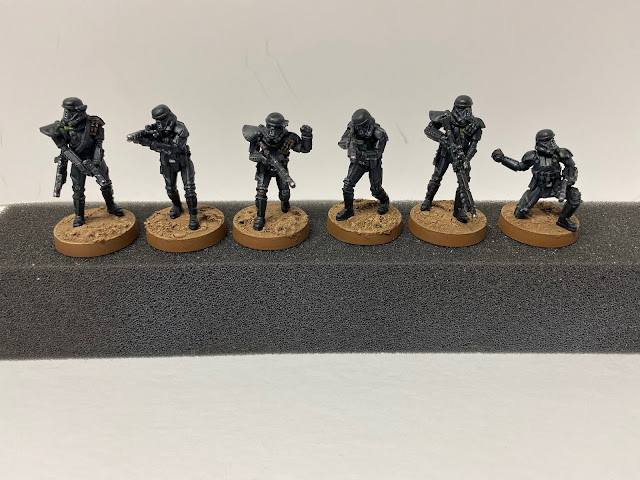 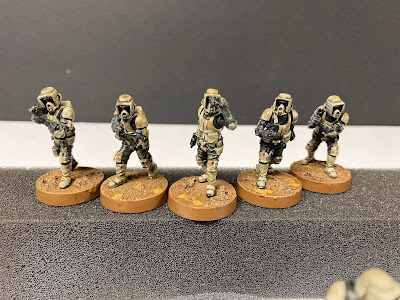 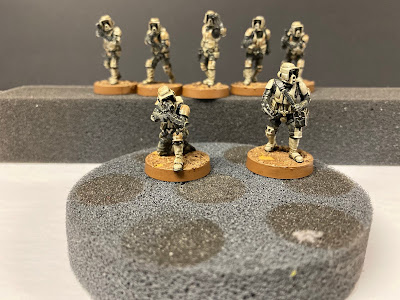 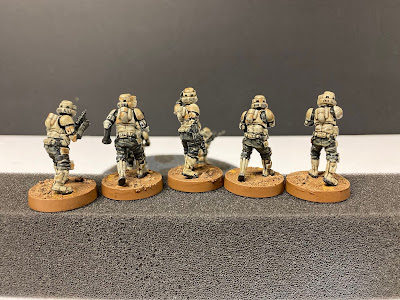 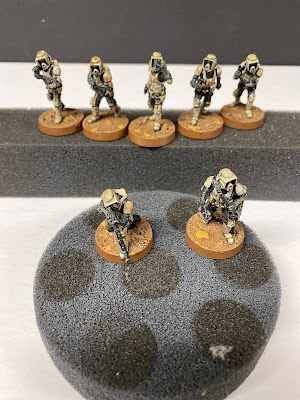 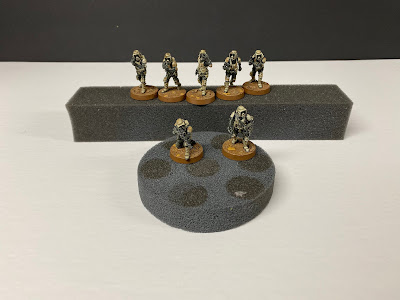 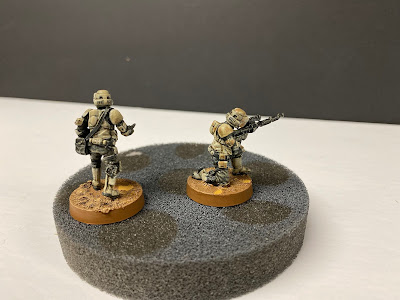 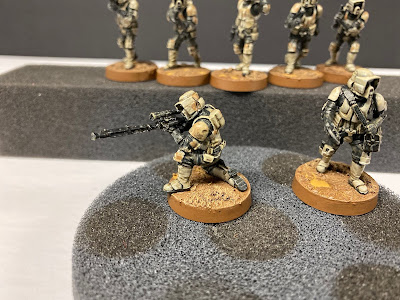 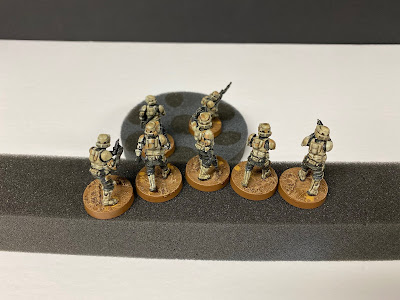 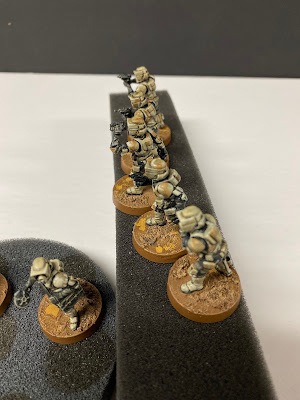 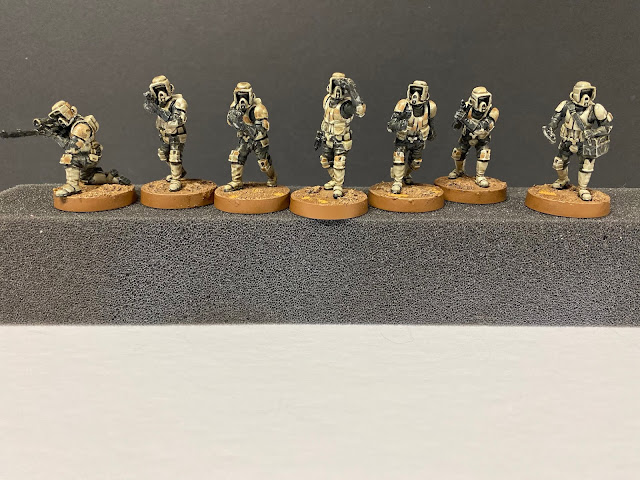 Thanks Duncan...I’m really happy with how they turned out. I just couldn’t do another pure white scheme.