I've had pretty good momentum with my posts at the end of last month...largely thanks due to Cangames, but, local convention notwithstanding I hope to keep some of that momentum going into June.

Over the past couple of months, I've had a couple of small terrain pieces on my side table just to putter at from time to time...nothing focused, but a couple of bits thrown together and then take my time getting the paint on them...make sure I like the looks, etc.

If I recall correctly, sometime around February I found a couple of interesting cardboard packing bits down in the recycling...they look fairly solid, they had a nice shape to them...and given that I had binge watched Game of Thrones over the Christmas holiday, I thought that these packing pieces could make some nice ice walls for Frostgrave and the Northern City. 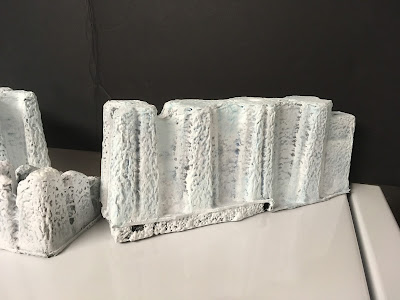 I added some styro where there was a gap...I didn't want to have to cut everything down further...and I thought on the table the styro would help it look like the walls literally sprung up from the rock...that was the thought at least, lol... 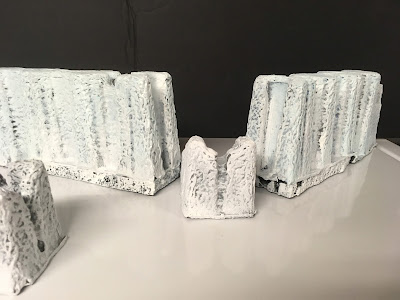 the smaller piece in the middle was a 'flappy' extension of the cardboard and I thought it could make a handy perch or spawn point for some particular piece of no good...I intentionally painted these smaller perches up without the 'ice' blue tones...

A different view of the perches and you can really see how the tone between the pieces compares.
Now the best test of any terrain piece...putting a figure against it to see how the effect goes.  I recently finished a Reaper 'Stone Golem' figure...I was initially at odds as to how to paint this one up...whether to go stone heavy or dirt/mud heavy...in the end I chose to follow how I envision the Northern City and I went with a much more stone like appearance.

I just changed up my phone over the past month and I've really been trying to get proficient at using the camera it came with...I tried a few pics with the flash...this one I wanted to get a good view of the figure over all with the ice wall behind him.  When I went with the stone look...I based in black and then Vallejo German Grey...then I thought I'd use more of a wet brush to make the colours pop more... 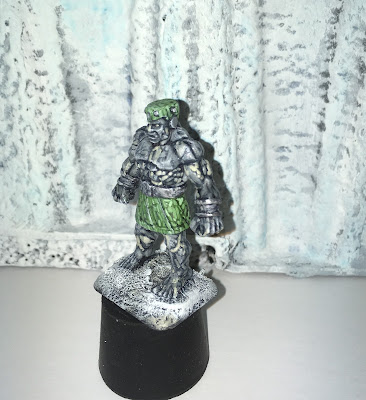 I painted VJ stone grey over the figure and then hit it with a heavy dark wash and went from there...VJ black grey, and then several tones down with that cut with stone grey and some off white.  I chose to go camouflage green with the headpiece and 'skirt' to really show off some contrast on the figure... 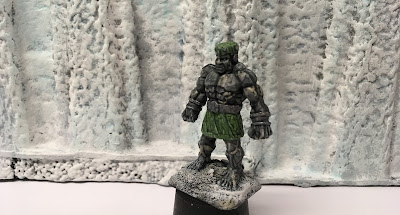 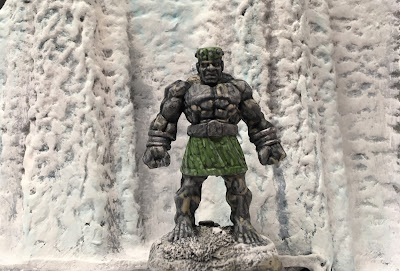 Looking at various stoneworks online and a few pieces around the house, I then emphasised specific areas of the figure...I finished the green first...those areas were the easiest to paint up for me and really took the paint well...the stone tones took me more time but I really like how they turned out. 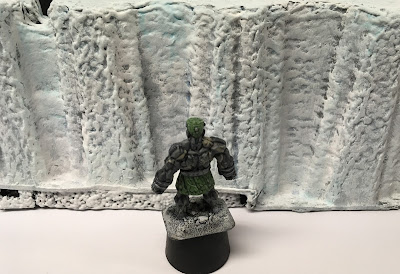 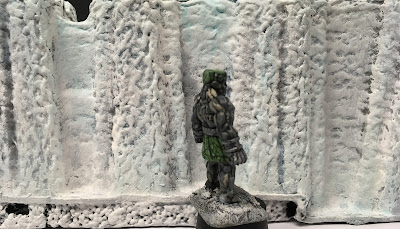