I hope all is going well...being a big fan of puns, I must admit I did enjoy the past week and the star wars themed days that seem to now be an annual event...depending on your flavour of course.  I didn't resist and had my own May the Fourth be with You post.  I did however resist to have the follow up 'revenge of the Fifth'.

Oh well, lost opportunities, etc...falling in line with my Imperial Assault posts, my latest figure off the bench is ISB Agent Blaise.  This figure is another great figure that comes along thanks to the Cloud City expansion, Bespin Gambit.  Now, while I am a fan of Star Wars, I do not know all of the backstories or rationale for why certain characters wear the dress/armour that they do.

For me, Agent Blaise is an example of this...the box art shows our Agent in what looks like Scout Trooper armour, really can't miss that distinctive helmet, but he's an Imperial Security Bureau agent...so, this is a minor head scratcher for me...oh well... 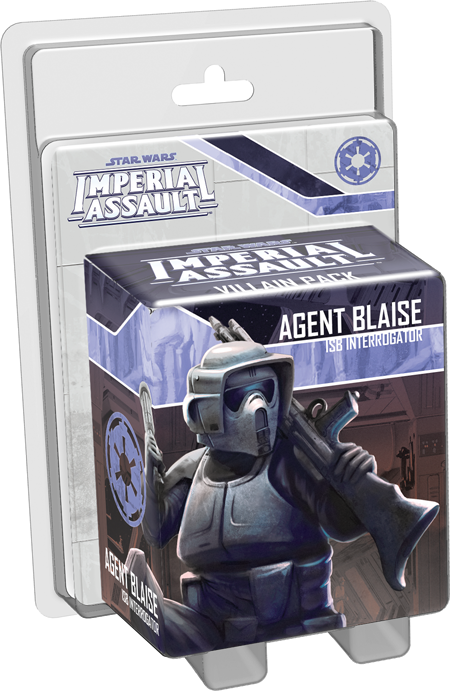 The figure was a lot of fun to paint up...again for me, the funny thing was that the pose on the box art is actually not what the figure looks like in the end.  Don't get me wrong! The figure has great definition and detail, but to this point, every figure I've painted for Imperial Assault has been a direct representation of the box art.  Agent Blaise is one tough cookie...his figure has him holding his helmet under his arm giving a stern fist of authority... 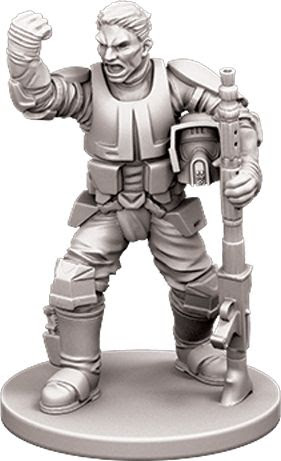 -picture from eminis.net-
Now, for me...I have no urge to buy the Bespin expansion, but I did like the looks of Agent Blaise...so I thought, the best place for this fellow was as a Merc in the Baron's Dirty Half-Dozen.  I went primarily with red on the chest and arm armour and a few variations on the gloves and greaves.  With the leg armour, I wanted to match the tone and shade of what I painted for Bender the SniperBot...the 'jumpsuit', flight suit, zoot suit...whatever suit...I decided to paint that with a very toned down blue, but not heavy on the grey either...I didn't want to directly copy what I had for my Levy Gunner. 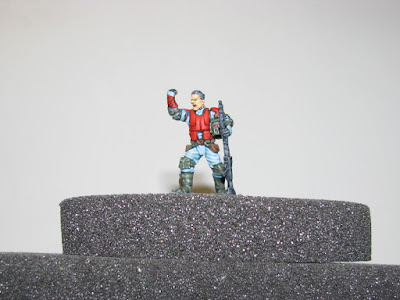 The light tones and white background were giving my camera a hard time...I definitely need more practice.  But in this case, you can see the blue tone highlight in the jumpsuit. 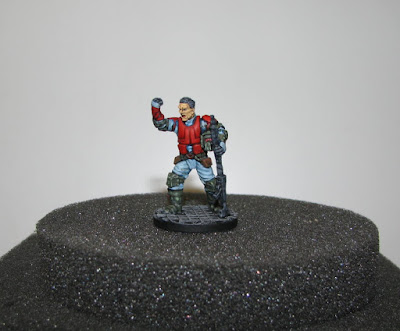 The face is very expressive...at some points there is almost too much expression.  When I was painting the layers I was really concerned that it looked like there were too many cracks in his skin...I had to reattack a couple of times to get it to my liking. 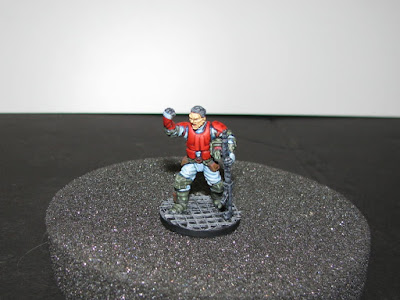 You can see the base I've used is similar to all of the Baron's other recruits... 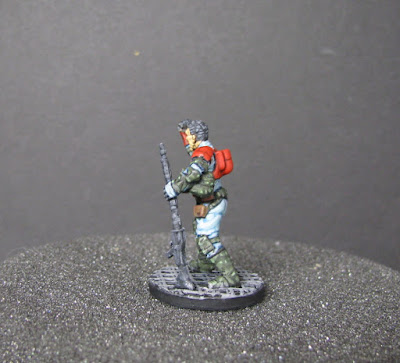 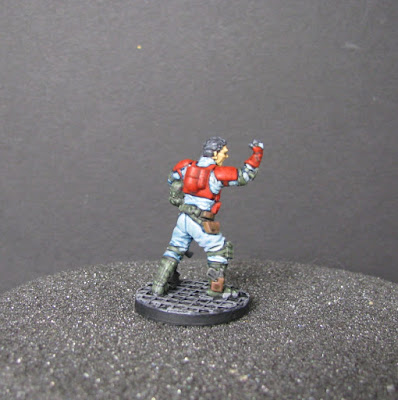 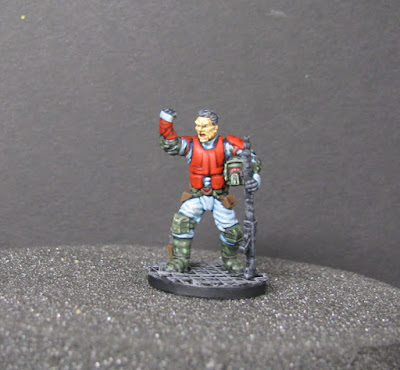 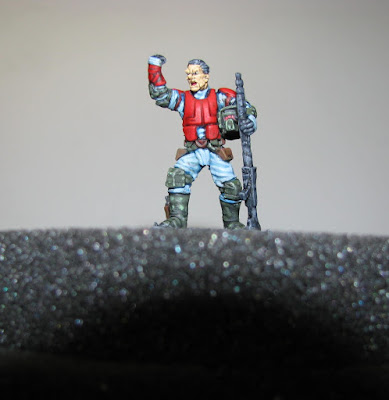 Agent Blaise...giving the fist of business to whoever will look at him.
Baron's Misfits...or Dirty Half-Dozen...I'm not sure which I like the most...being a fan of Lee Marvin, I see the Half-Dozen sticking... 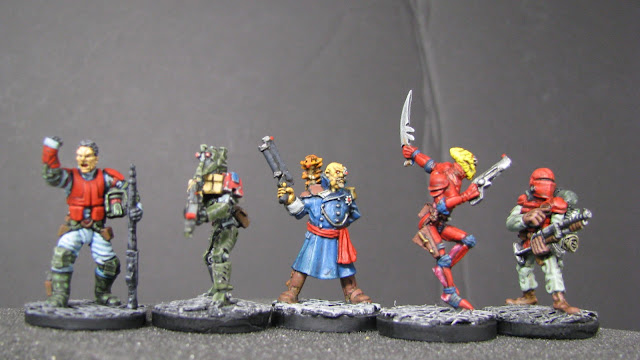 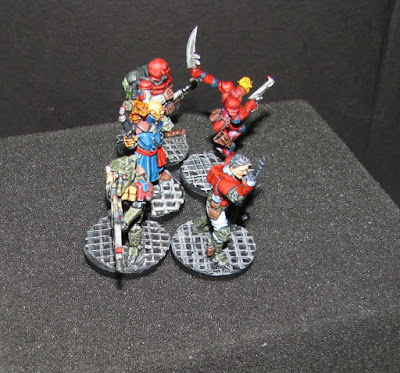 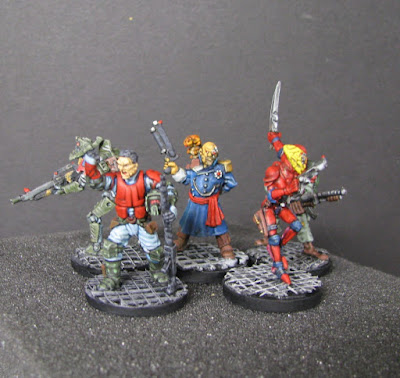 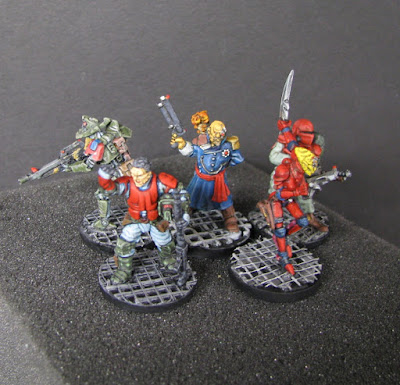 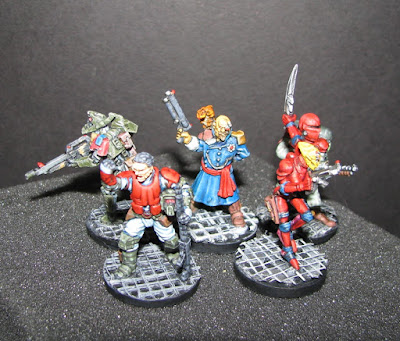 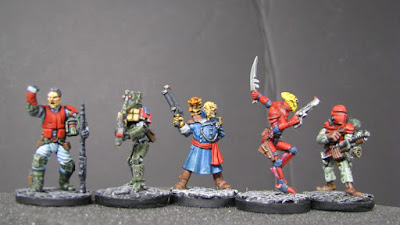