In a dramatic turn AWAY from my recent Star Wars binge, I thought I'd post for your viewing pleasure the latest addition to my SAGA Vikings.  If you harken back to an earlier time, you may have seen my post on the first 4 points of my Viking Warband...

Now, in the end I unfortunately could not take part in our clubs tournament, but nonetheless, I wanted to finish off the figures that I had...get them off the board of shame...and press on with some new additions.  A couple of neat things for me on this, was this was the first batch of non-Star Wars figs that I had painted up using my Sorastro inspired painting technique...AND...this gave me a chance to directly compare my painting style pre and post Sorastro...

The changes were very interesting to see and got me on a train of thought to take a look at how my technique for figures has changed over the past 12 years that I've been at this hobby...but I'll talk about that later in a future post with some pictures of the first figures and vehicles I painted, some that I painted up about 5 years ago, and some that I will have just completed...but again, that will be a later post....

So, besides the challenge of trying out my new technique, I wanted to make sure that I could make these warriors stand out enough on the battlefield in order to distinguish them from the rest of my Viking horde.  My immediate solution to this came during the basing phase when I prepped all the bases for my Vikings...have visible differences in sanding, flocking, and rock...ing...to make the unit look cohesive and distinguishable from above.  The second piece was to make sure their colour scheme was different as well.  I was using many similar poses in this second unit of warriors as I had used in my first unit.

I'm happy with the outcome...the basing is dissimilar enough that I can see the difference...next step will be to get them on the battlefield and get the General's eye view.  Their overall colour schemes are equally different and I like the looks of the new technique...it leaves them a little 'shiny' per say...but I'm happy with them. 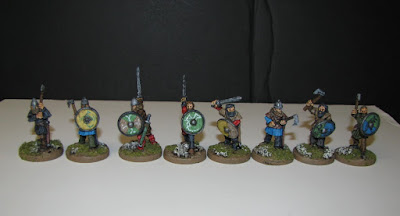 My second Viking Bondi...I elected to use larger rocks on their bases and keep the colour very grey/white... 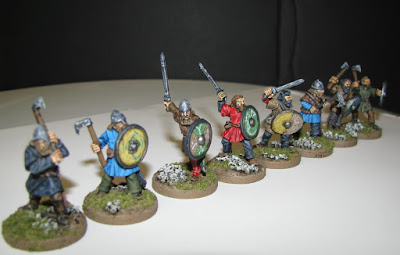 Rear view of the Bondi...you can get a better view of this units bases.  I'm very happy with how the colours turned out... 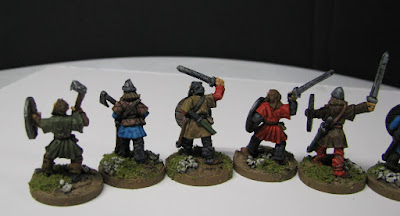 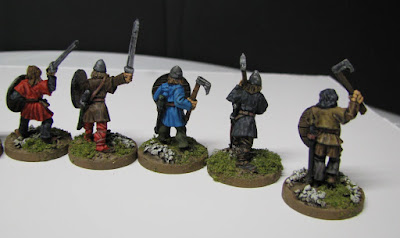 Up close shot...the shields were pretty fun to try out...I went with more freehand drawing on the shields this time...it was kind of fun to give it a different try. 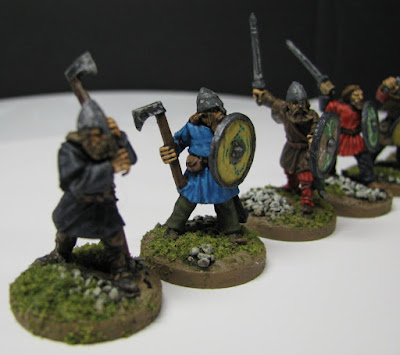 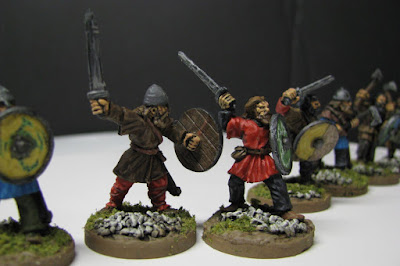 A little teaser...some Frostgrave/Northern City themed terrain...two large ice wall sections thanks to some crafty Recycling bin diving and inspired by my recent binge watching of Game of Thrones. 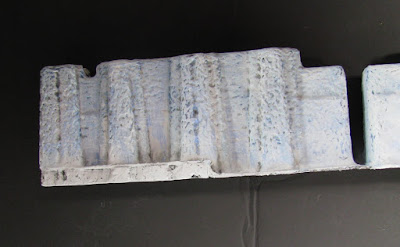